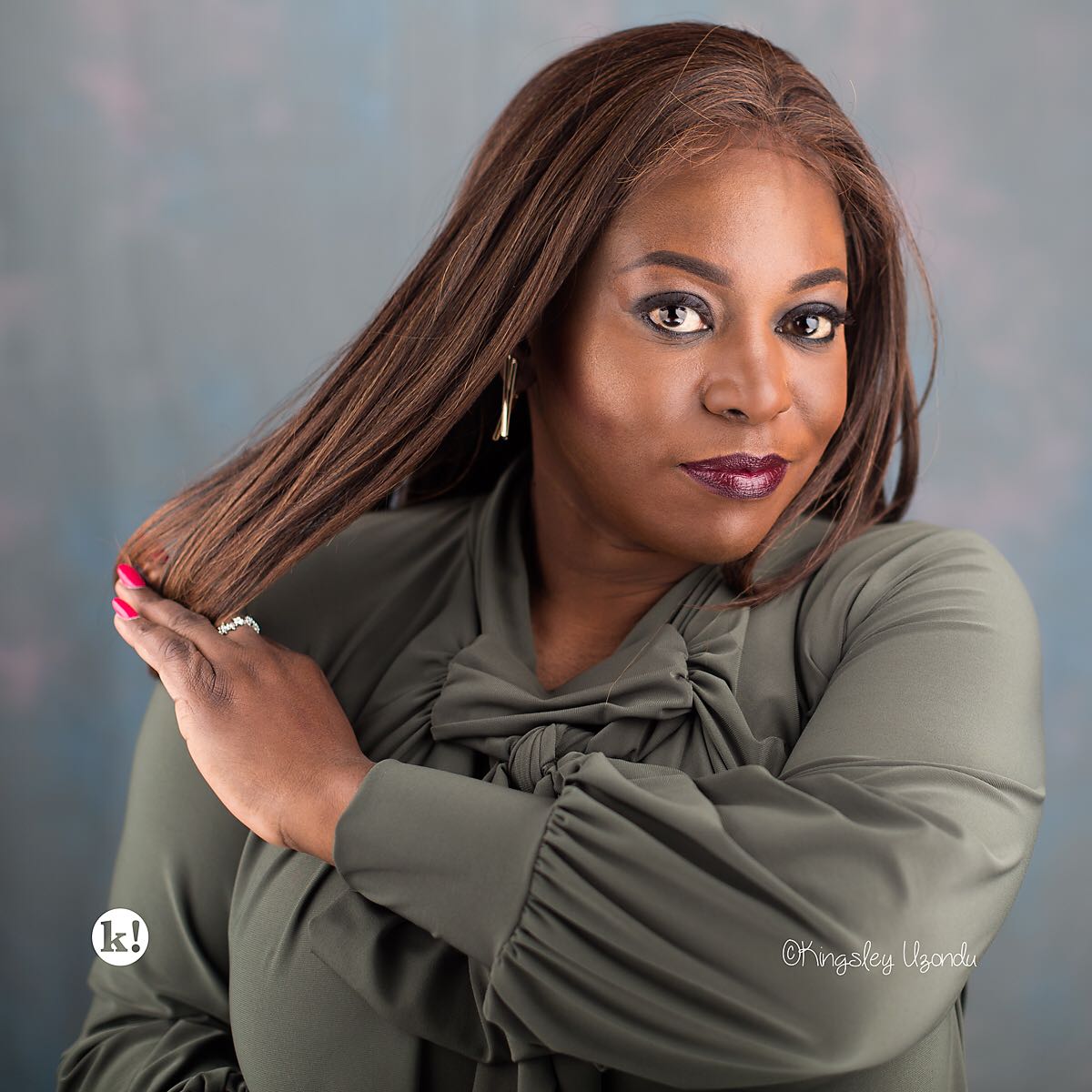 Evelyn Obahor is one of the most outstanding TV Presenters and Movie Script Writer/Producer in African Television and movie industry.In the last 30 years, television host, script writer and movie/TV producer Evelyn Obahor has become a recognisable face in the media industry as one of the most successful media personalities of African descent.She started her broadcast career in JOS, PLATEAU STATE Nigeria working on programmessuch as BEHIND THE CLOUDS . Working with renowned and experienced hands such asMATT DADZIE, BILIKISU GUOBADIA, SADIQ DABA, EVELYN IKHUENOBE and anymore, she garnered the extraordinary skill of presenting . With her out standing dedication and talent while working on various productions, she was invited to join the crew on MR. JOHNSON film where she worked in the costume department and having the rare privilege to work with PIERCE BROSNAN of the JAMES BOND fame. While on that set she was again called to work on another film set called KA SARAMU CE also as a costumier . However, a day before filming, she was assigned to handle thecontinuity of the production. As much as the responsibilities were, Evelyn, meticulously and
professionally carried out this responsibility to its perfection. This won her numerous accolades. She is also well known for her contribution in the Film SOWETO.
6 years later, she became the continuity announcer on the Nigerian Television Authority (NTA BENIN) before moving on to MAINFRAME PRODUCTIONS and was part of the crew on TI OLUWA NE LE. Evelyn also worked with DBN Productions asproduction assistant,producing and scripting programmes and TVcommercials. DBN PRODUCTIONS soon became DBN TELEVISION. Proudly, Evelyn was one of the few who mappedout the channel’s creative outlook. While there, DBN was the best station inLAGOS.
Rising to the rank of Manager Programmes and Head of Presentation.While at DBN TV, she created and presented programmes such as the ever popular NIGHTSHIFT programme,LUNCHDATE, the first ever programme to be to interview a personality over lunch in a live studio. AM TV, the first ever interactive breakfast programme.HOME VIDEOREVIEW where she criticised nollywood videos, a collaboration with a NationalRadio Station and FAMILY AND FRIENDS a Saturday and Sunday breakfast show.In 1998, Evelyn left DBN to set up her own production company producing programmes
such as EVE…THE WAY WE ARE, and also became a media consultant. While working on her own projects, she also presented NTA 2 THIS MORNING with the likes of the late; the programme which is today known as AM EXPRESS. She also presented HELLO LAGOS on SILVER SCREEN TELEVISION.
On returning to the UK her place of birth, she quickly was spotted by BEN TELEVISION, the first Black station in the UK where she created and presented programmes such as BEN’s BREAKFAST SHOW which is now the flagship of the station, ON THE FEMININE SIDE and HEY LETS TALK.Leaving BEN TELEVISION, she set up her own company,JUSTEVE BROADCASTING NETWORK LIMITED now known as FLOODLIGHT BROADCASTING NETWORK LIMITED where she has produced and presented flagship programmes such as HEY LETS TALK,THE JUSTEVE SHOW,MY WORLD and the reality show THE BIG SEARCH.
She is also a prolific script writer with my credits to her proficiency. She also scripted all the promos and jingles for the USA 94 World Cup. Because of her dexterity and attention to detail she was invited to script and produce documentaries 3 years in a row the achievements of the Edo state Govenment.
As well as a creative genius in the media and TV production,Evelyn is also a dedicated mother blessed with a 24 year old son Daniel who has become a fantastic footballer,currently playing in semi-professional football for a local club.Evelyn has a passion for children. She has recently set up an organization HAVEN OF LIGHT THE JUSTEVEORGANISATION SUPPORTING SURVIVORS OF RAPE. Having being a survivor of rape.I will die a fulfilled person when I have impacted the world by making a change and giving hope to all suffering and struggling people. I have been through the school of life with many
hard experiences of which i have come out of very strongly and i am now ready to share my experiences to impact the world.Her chat show THE JUSTEVE SHOW is currently airing in America Houston Texas, TorontoCanada, the UK and AfricaAs her media empire enlarges, Evelyn plans to launch her new magazineHEY! MAGAZINEand her Fragrance JUSTEVE LONDON at the end of this year 2016.

How To Focus: Improve Your Concentration by William Goldstein

Amazon: https://www.amazon.com/dp/B0991LPXWJ As a recruiter that’s helped thousands succeed in their careers, William Goldstein has been teaching people the skills of success for years. In this book, he reveals the secrets of staying focused and improving productivity. If you find yourself frequently distracted and are ready to take time back into your own hands, then […]

XRAEVIZION Announces The Release Of His Exciting New Music Before 2023

Talented and inspiring artist XRAEVIZION has been one of the favorite artist of our readers.That’s why we hardly skip any of his releases. Ivray Lee Wilson Jr., who is also known as Xraevizion, has announced that he is coming out with new compositions for his fans before 2023. Ivray is a Native American musician. In […]

Wismiii ! What if i have lost something? EXACTLY!

We’ve all lost something and couldn’t figure out where to find it. With Wismiii, your search is over! Wismiii is a global lost and found service app. All you have to do is: Report your loss Contact other users Check off places where you stay And get help finding your lost item! You can even […]