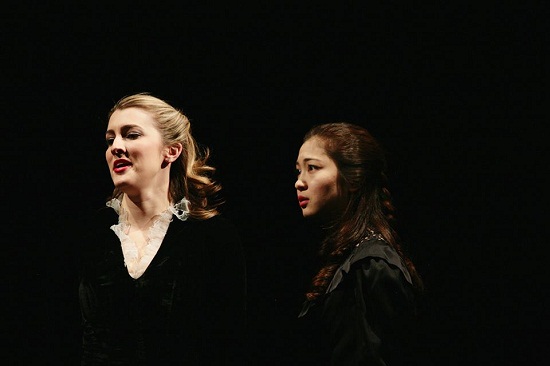 When we went to see The Light Princess when it was an off-Broadway hit in New York we were struck by the beauty of the sets, the colorful costumes and the lighting effects. Of course, we certainly didn’t go just to see those things, we went to see a great story, which we saw, and terrific acting – we definitely were not disappointed in that category either. We were also captivated by the character, Gravitron, played by Dralla Aierken.

We remembered that we had seen Dralla in several films before we saw her in this play and we had been impressed with her talent each time we laid eyes on her. She was fantastic in The Light Princess, and that’s not to take anything away from all the other fabulous performances that night. Dralla, however, caught our eye and we saw something very special in her that we haven’t seen for a long time. At first, we couldn’t quite figure out what it was but when we started thinking about it after the show, it became obvious that Dralla had all the things that make not only a good actress, but a great actress.

Poise and confidence were the first things we able to pinpoint in her flawless acting. Other qualities such as high intelligence and the ability to meld herself seamlessly into her character became obvious the more we thought about each scene she was in. When she first stepped out from the wings we knew that this young woman possessed uncountable elements that would bring her to the forefront of the acting world. She simply had everything going for her to make her a success in the world of theater and film.

And we were absolutely right, because we have seen her many times since that night at the play. She did have all those unspoken attributes that other great actresses have had throughout the ages. The ability for accents like Meryl Streep, the subtle command of character like so many other famous actresses such as Scarlet Johansson, Natalie Portman, Emma Watson and the presence that only the best of the best have.

Dralla makes acting look easy, which is the whole secret of being at the top of one’s game. Would we call her a natural? Well we would say that she has many natural abilities coupled with an abundance of talent, and then we would tell you that she has worked extremely hard and studied hard to get where she’s at today. And then we would finally tell you to go out and see Dralla whenever you can because it might be your only chance to see a real artist do what she does best – act.

Review: Sangamon Watches, a Company of History and New Beginnings

Sangamon Watch Company (Sangamon Watches) is a company that values American history and the Midwestern values.  Founded in Springfield, Illinois USA, this new wristwatch company is named after the Sangamon River, which runs from Central Illinois and feeds into the Mississippi River.  Abraham Lincoln famously loved the Sangamon River, as his family settled along the […]

CBD And Other Skin Conditions

Currently, CBD Lotion is mostly used in skin care products due to the fact that it has multiple health benefits including to delay the visible signs of ageing in women, combat certain skin conditions such as acne and result in healthier looking skin. However, the health benefits go even further to fighting other skin diseases […]

How To Stay Away From Traps In Groupon

Goupon is presently the sultriest theme of youthful blood. It is famous in bunches of fast utilization zone, including sustenance, dress, excellence and wellness, and so on and additionally relaxation and stimulation territory. Quality lies in numbers, many individuals think they can get the best minimal effort products or administration in Groupon. As indicated by […]