Koushik is an actor known for his many roles in film, television, and theater, but even though he is firmly established in Hollywood and wanted to be an actor from an early age, life took him in a different direction first. He goes by the one name Koushik, but was born in the small town of Burnpur in West Bengal, India, he followed societal expectations and earned his Ph.D. in Human Genetics in Cape Town, Africa.

Then he moved to Los Angeles as a scientist, and that’s when his early passion for acting was reignited. He left his day job, and in a short time found himself involved in comedy, sketches, and improve; which led to bigger roles in live plays, commercials, TV, and film. He credits his quick rise to his unique gift in comedic timing and delivery. 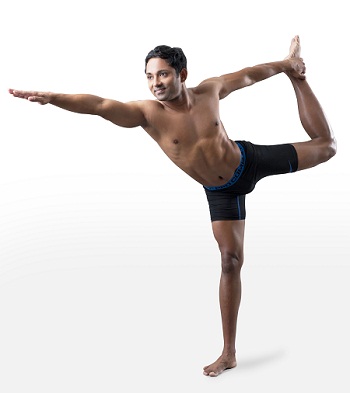 Some of his film credits include Book of the Damned, I Believe, Bloody Hands, Karma Dog, Above the High Road and a string of others. He is particularly well known for his television roles as Jamal Muti in Criminal Mind: Beyond Borders, and as Buddha in National Geographic’s The Story of God with Morgan Freeman.

As far as commercials are concerned, Koushik can be found in ads for Hewlett Packard, Zip Recruiter, and Free Credit Report, Xoom.

His theater work includes “The Naked Yogi”, which is to be performed at the Hollywood Fringe Festival this year. At the IO West Theater, he can occasionally be found doing sketch comedy and improve shows.

In addition to acting, Koushik is a dedicated yogi, and is also a yoga instructor at 24 Hour Fitness. He has been practicing yoga for 25 years, since he was a child, and it is a natural part of his life.

Lest you think that he is one of those actors that suddenly get a whim to move to Los Angeles to become an actor, Koushik has committed himself to learning his craft by attending intensive training in acting, theater, and drama all over the country.

Fluent in Hindi , Bengali, and English, he is in high demand as a voice actor.

Marion Julius born in Durban South Africa lives and works in Australia. she has appeared on front covers of international fashion magazines .She is very creative, unique and talented having studied also over the years obtaining many qualifications and has experience working in many industries. Marion is passionate about fashion and enjoys working in the […]

AC: When did you first start designing? GE: I started sewing at age 14 and designing and making/ modifying patterns for my own dresses, pants, skirts, etc. Around that time I started sewing, I was influenced by The Cure and all types of alternative music. My style is constantly changing, and I’m an open minded spiritual person. […]

The Passion And Determination Of Lil’Phat

If you are passionate about something then nothing can stop you from succeeding at it. The Russian break dancer Lil’Phat, whose real name is Ilia Igorevich Openchuk is living proof of that adage. He started break dancing after he saw some teenagers doing it a children’s camp he was attending. He couldn’t get over the […]